This copy of Alfred Lord Tennyson: A Study of his Life and Work by Arthur Waugh was formerly owned by William Gordon McCabe, a Civil War captain turned historian and poet. 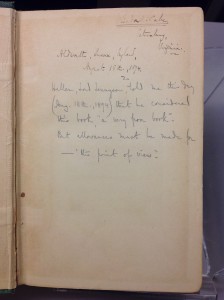 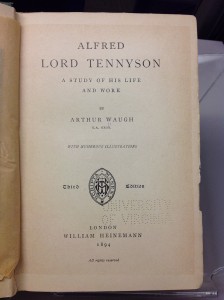 McCabe has annotated the free endpaper not only with his own name and hometown of Petersburg, Virginia, but also with the following notation: “Aldworth, Sussex, England, August 18, 1894.” Later McCabe added a few lines in pencil explaining the significance of the latter place and date:

Hallam, Lord Tennyson, told me this day (Aug. 18th, 1894) that he considered this book, “a very poor book.” But allowances must be made for—”the point of view.”

The great English poet Alfred, Lord Tennyson had died in October of 1892, the same month that Waugh’s biography was first published. Hallam, Lord Tennyson was Alfred’s son and evidently did not think highly of Waugh’s portrayal of his father.