Camp-Fire and Memorial Poems by Kate Brownlee Sherwood is a collection of poetry published in 1885 and written in dedication to those soldiers—both living and dead—who served in the Union forces during the Civil War and became members of a veterans’ organization called the Grand Army of the Republic (GAR). This particular copy of the book features two inscriptions, one establishing the book as a Christmas gift from the author and another indicating the owner and recipient, J. Warren Keifer: 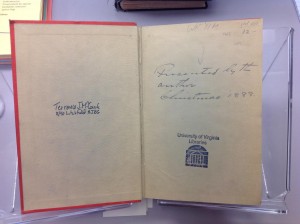 Gift inscription on the free endpaper: “Presented by the author – Christmas 1888.” 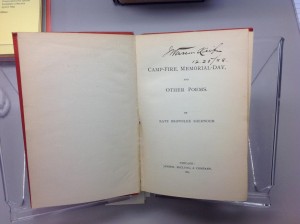 Although the extent of the relationship between Keifer and Sherwood cannot be known definitively, the biography of each gives us a glimpse into a potential professional relationship, if not a friendship.

In her early career and throughout her life, Kate Brownlee Sherwood involved herself in journalism, working for several Ohio newspapers as a typesetter and leader-writer, as well as owning and serving as editor of the Canton Daily News-Democrat. Married to Congressman Isaac R. Sherwood, she was also highly active in politics and became known as the “Poetess of the Congressional Circle,” writing political and patriotic poems advocating the Union, many of which she read aloud at National Conventions for the GAR. After the Civil War, Kate Sherwood possessed one of the most outspoken voices calling for a national congress of women, and in 1883, she co-founded the Woman’s Relief Corps (WRC), an organization consisting of women who supported the Union during the war. The purpose of the WRC was to work in conjunction with the GAR and assist in the promotion and management of Memorial Day (originally a day used to educate youth about patriotic nationalism).

Warren Keifer, a Republican Representative from Ohio, fought for the Union Army as Major General and served as Speaker of the House of Representatives from 1881-83. When not in office or serving in the armed forces, he practiced law in his hometown in Clark County, Ohio.

Sherwood and Keifer, both Ohio-born, attended several GAR and WRC National Conventions (including the one hosted in San Francisco, California, among the participants of which both were named in the San Francisco Daily Morning Call). It is likely that the two of them met at one or several of these conventions. Tucked within the pages of this copy of her patriotic poetry is Sherwood’s WRC business card: 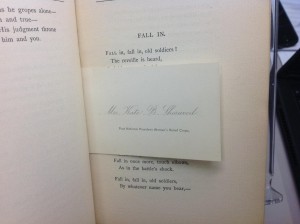 Whether Sherwood and Keifer were friends, colleagues, or simply acquaintances, this seemingly insignificant piece of paper and the inscriptions found within a book in Alderman Library’s circulating collection remind us of literature’s power to bring individuals together. Just as Sherwood’s poetry served to unite Americans in the remembrance of soldiers, the physical book itself provides evidence of human connectedness.

“Sherwood, Mrs. Kate Brownlee.” American Women: Fifteen Hundred Biographies with Over 1,400 Portraits: A Comprehensive Encyclopedia of the Lives and Achievements of American Women During the Nineteenth Century, Volume 2. 1897. Print.

Journal of the National Convention of the Woman’s Relief Corps, Auxiliary to the Grand Army of the Republic 7.26 (1889). Print.

Journal of the National Encampment of the Grand Army of the Republic 48 (1915). Print.