UVA Library Video Preservation Specialist Marc Campbell approached us with a set of books from his own collection, two volumes of English poet William Cowper’s translation of Homer. Marc had noticed that the books contained extensive handwritten marginalia and wondered if we would be interested in having a look. The result of our investigation is this guest post by Book Traces @ UVA volunteer Kaye Marie Ferguson. (Edited by Kristin Jensen.)

This privately owned copy of Cowper’s translation of Homer (published in 1802) contains extensive marginalia and annotations by an unnamed reader–sadly, there is no inscription–which provide a general idea of the kind of person he may have been. (Given the time period, I am willing to assume that this reader was most likely male, as women characteristically read for pleasure and did not generally have access to the education exhibited by this reader.)

Admittedly, I have never read any Homer, so before I could truly make sense of the reader’s comments, I had to research Cowper’s translation. Most, if not all, literary criticism defines Cowper’s Homer as “Miltonian” and “un-Homeric.” But what does this mean? Homeric style is most importantly characterized by the rapidity of flow and simple, direct expression (Rouse 1971, 5). In the original Greek, Homer makes use of dactylic (or heroic) hexameter (six metrical feet to a line, each made up of one long and two short syllables), which impacts the flow of the lines. Longfellow’s Evangeline is one of the rare examples of this meter in English:

Read it once with emphasis on the non-italicized syllables, and then read it naturally or recite it aloud; the rhythm is still fairly prominent, but–despite the unusual word order characteristic of poetry–it does not feel stilted as many other meters do (although it still has more of a focus on stress than Greek would). Nevertheless, the example does show that dactylic hexameter resembles the flow and rhythm of speech. This contributes in some degree to Homer’s rapid style in that the lines are propelled forward without being hindered either by an unnatural, forced rhythm or by rhyme.

Miltonian style, on the other hand, is characterized by unrhymed lines in iambic pentameter (blank verse: five metrical feet to a line, each with an unstressed syllable preceding a stressed syllable). Cowper’s opening lines of The Odyssey serve as a good example (though they contain unintentional slant-rhymed lines, which are not characteristic of the whole work):

Muse make | the man | thy theme, | for shrewd | ness famed
And genius versatile; who far and wide
A Wand’rer, after Ilium overthrown,
Discover’d various cities, and the mind
And manners learn’d of men in lands remote.

Although the unrhymed nature of blank verse does imitate the naturalness of speech, the iambic pentameter reads unnaturally as a result of the all-too-intentional trot-like flow. Beautiful in its own right, iambic pentameter is simply not suitable to Homer, according to every literary critic I read, because its stilted nature slows down the reading of each line. It merely does not lend to the simplicity of expression found in the original works. The “direct expression” of everyday language, metaphors, and similes are replaced by contrived rhetoric that fits within this restrictive meter.

It is important to note that the literary criticism I am citing is not contemporary to the reader or to Cowper; it was published around 1861, while the reader had been writing in the early 1800s. Nevertheless, this criticism illuminates certain aspects of the reader’s annotations, which in turn help to illuminate the criticism. Now for the real question: who was this unnamed reader?

First, I believe that the reader was at least middle-aged, as there are several formal elements of the his writing that indicate this: the unstandardized spellings of certain words, such as “Antients,” as well as the long ‘s’ and capitalized nouns, all of which began to disappear from print toward the end of the 18th century and in the early 19th century. His use of 18th century conventions suggests that he grew up learning and using them; therefore, he was an older gentleman.

Second, the reader was an upperclass gentleman and scholar, as he had access to an education in the classics. The passage in which the reader responds to Cowper’s footnote about the purpose of Helen calling herself Κυνώπιδα–meaning dog-eyed (translation courtesy of Rachel Makarowski)–reveals this.

Reader’s annotation: The Greek word “face of a bitch” is somewhat strong for a lady to give herself. I doubt if any of our [?] Dames would be as candid, yet certainly Helen meant to [?] her own elopement.

The reader provides his own translation of the word in Cowper’s footnote and then gives his own reason for Helen’s use of such a strong word to describe herself. Also, in another passage he points out a note he remembers from Pope’s translation; thus, having read at least two translations of Homer and having the ability to translate the original Greek himself, the reader must have been learned.

The reader also exhibits the capacity to think critically, operating like a literary critic. The following passage and the reader’s accompanying annotations reveal this.

Cowper’s translation:
Few sons their fathers equal; most appear
Degenerate; but we find, though rare, sometimes
A son superiour even to his Sire*.

Cowper’s footnote: *The sentiment is justified by the opinion of many Antients. Ælius Spartianus in his life of the Emperor Severus says “It is sufficiently known that hardly any great man has left a son of much merit or use behind him.”–The sons of heroes are a nuisance, was proverbial, and Demosthenes observed that good and valuable men are so often succeeded by a race of triflers, that it seems the effect of some fatality.–C. (Homer trans. Cowper 1802, 41-2) 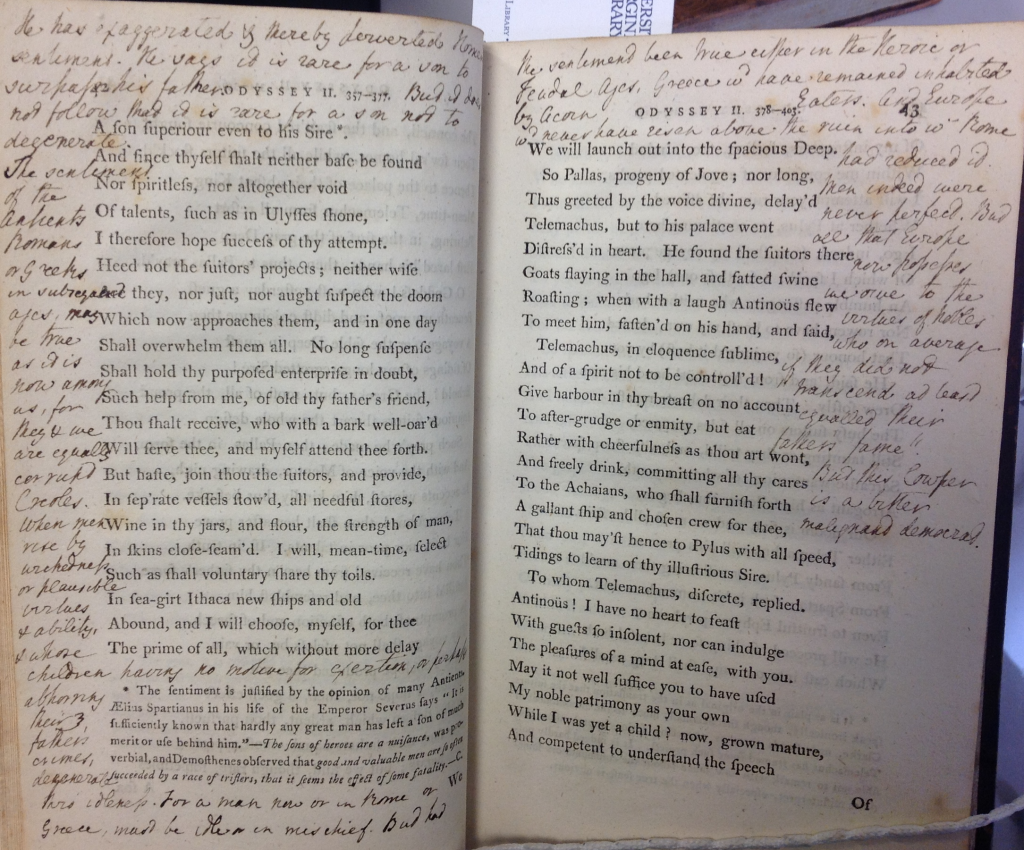 Reader’s annotation: He has exaggerated & thereby perverted Homer’s sentiment. He says it is rare for a son to surpass his father. But it does not follow that it is rare for a son not to degenerate. The sentiment of the Antients[,] Romans[,] or Greeks in subsequent ages may be true as it is now among us, for they & we are equally corrupt Creoles. When men rise by wickedness or plausible virtues & ability, & whose children having no motive for exertion, or perhaps abhorring their father’s crimes, degenerate this idleness. For a man now or in Rome or Greece, must be idle or in mischief. But had the sentiment been true either in the Heroic or Feudal Ages, Greece wd have remained inhabited by Acorn Eaters. And Europe wd never have risen above the ruin into w[hich] Rome had reduced it. Men indeed were never perfect. But all that Europe now possesses we owe to the virtues of [illegible] who on average if they did not “transcend at least equalled their father’s fame”. But this Cowper is a bitter malignant democrat.

In saying Cowper has “perverted Homer’s sentiment,” the reader implies that he himself understands what Homer is truly saying. He disagrees with Cowper’s interpretation (not necessarily the translation), arguing that the rarity of a son becoming greater than his father does not necessarily mean it is rare for a son to remain equal to his father. He reinforces this idea by providing a logical sequence of examples. Thus, the reader is certainly capable of critical argumentation.

Furthermore, many of his comments show that he came nearly to the same conclusion as the critics mentioned above. Though the reader did not explicitly refer to the meter as the source of the problem, he did point out several issues of grammar that resulted from it, which indicate to me that he was, perhaps, coming to the conclusion that Miltonian style is unsuitable to Homer. 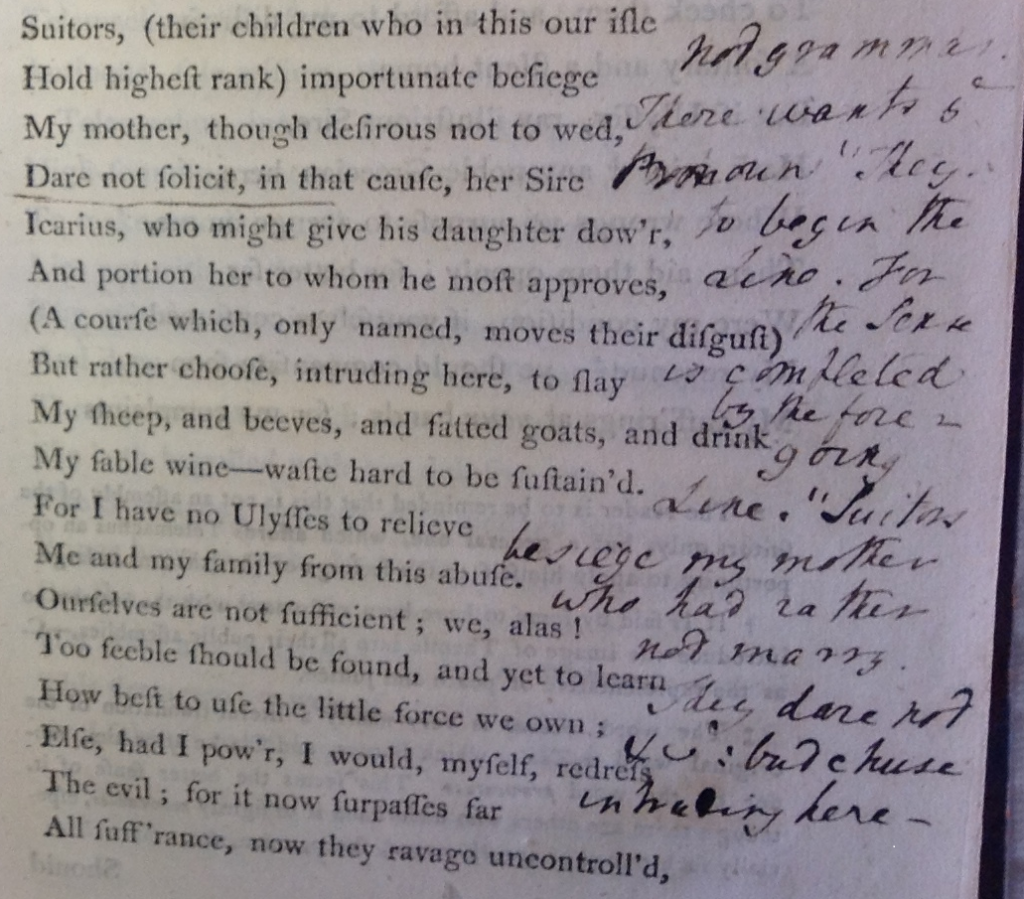 Cowper’s translation:
Suitors, (their children who in this our isle
Hold highest rank) importunate besiege
My mother, though desirous not to wed,
Dare not solicit, in that cause, her Sire…
[reader’s emphasis] (Homer trans. Cowper 1802, 29)

Reader’s annotation: Not grammar. There wants [the] pronoun “They” to begin the line. For the Sense is completed by the foregoing line. “Suitors besiege my mother who had rather not marry. They dare not &c. but chuse intruding here – 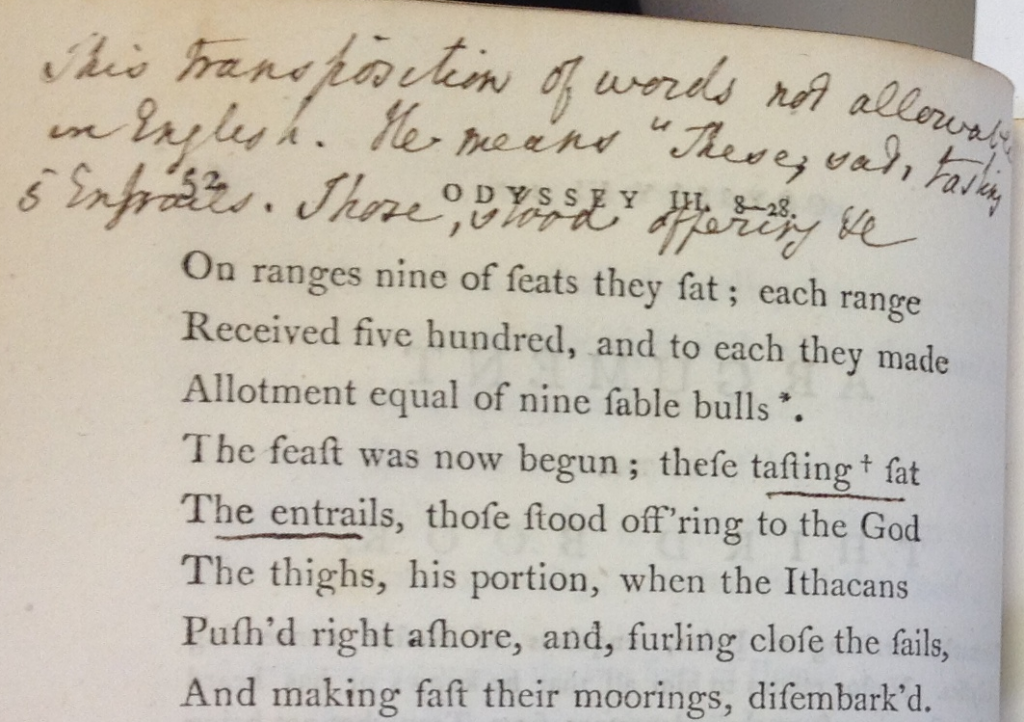 Cowper’s translation:
The feast was now begun; these tasting sat
The entrails, those stood off’ring to the God
[reader’s emphasis] (Homer trans. Cowper 1802, 52)

Reader’s annotation: This transposition of words not allowable in English. He means “These, sat tasting [the] entrails. Those, stood offering &c.

In the first example, the reader points out that the subject of the sentence (“Suitors”) gets lost, and the line conveys a different meaning than Cowper intends. However, in order to keep the meter consistent, Cowper would not have been able to add the word “they,” as it would give the line eleven syllables instead of ten; therefore, the line would not have been in iambic pentameter unless Cowper were to rework all of the lines in order to clarify the meaning. The second example presents a similar problem. The word order muddles the meaning of the lines, but the words are forced into this placement by the meter. Compare the “unallowable” transposition with the proper one:

In the grammatical version, the emphasis is on the wrong syllable in the word ‘tasting,’ making the line flow awkwardly. The flow is better in the ungrammatical, but the meaning is unclear. As a result, iambic pentameter limits word order possibilities and, by extension, the comprehensible communication of the idea. This is the opposite of Homer’s style–that is, the direct, simple expression of a thought. The reader’s annotations reveal that iambic pentameter is too restrictive for something like Homer, though he does not explicitly come to this conclusion. These annotations reflect the early evidence-gathering stage in the formation of a critical argument.

I am not trying to conclude that the reader was making the same arguments as future literary critics, but rather I am trying to show how the reader’s annotations reflect the precursory thought processes of the critic. Perhaps the reader himself engaged in literary criticism. We cannot know this since there is no owner’s inscription to indicate who he was; we can, however, conclude that the marginalia demonstrate critic-like observations. Additionally, his commentary and the criticism that emerged later illuminate one another, providing an idea of how certain ideas about a work may have come about.