During my stint with Book Traces @ UVA, I came across this intriguing intervention in one of the books I had pulled out. It was a book addressing the existence of God that was published in 1919: God and the Struggle for Existence written by B. H. Streeter. Behind the front cover of the book I found an extensive piece of annotation, which seems to have been first written on a separate piece of paper and then cut into pieces so that it could be accommodated in the book. The letter was signed Eva G. Orndorff. 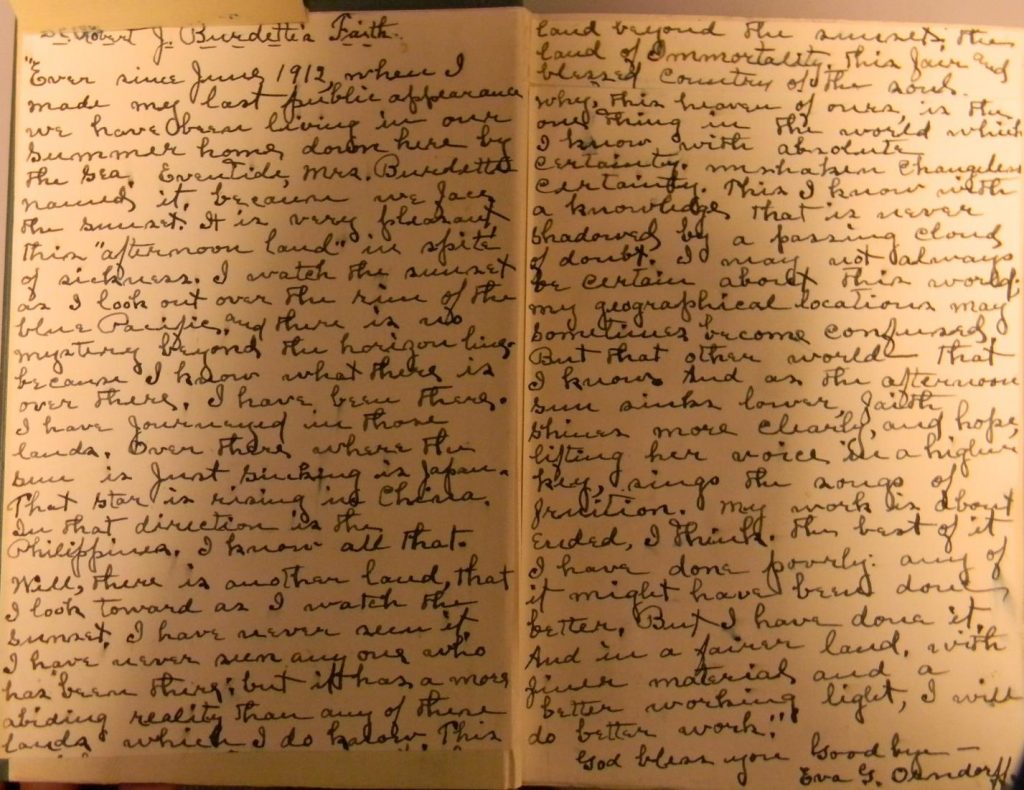 What makes this intervention the subject of my first Book Traces @ UVA blogpost is the strong urge of the book’s owner (at that point of time) to have this text somewhere in this book which deals with a subject not directly related to the contents of the book but finds some familiarity with it on the grounds of a belief that there exists a world for one to pass on to after one leaves the world we are all in forever. “Well, there is another land, that I look toward as I watch the sunset,” reads the text transcribed by hand. “I have never seen it. I have never seen anyone who has been there; but it has a more abiding reality than any of these lands which I do know. This land beyond the sunset—this land beyond immortality, this fair and blessed country of the soul why, this heaven of ours is the one thing in world which I know with absolute certainty, unshaken, changeless certainty.”

On closely examining the text I saw that it begins and ends with quotation marks which suggest that this was actually a quotation of a text that was originally written by someone else. On researching in depth about the contents of this text, I came across a few newspaper articles where the same text was repeatedly quoted. One of those articles was in a newspaper titled Presbyterian of the South; the article appeared in the 14th July 1915 edition of the newspaper. It was a historic American newspaper published in the early 1900s. The article appeared under “Family Readings” and was taken out of what appears to be personal letter that was written by a certain Dr. Robert J. Burdette to a friend of his residing in New York at time.

I tried to find more details about Robert J. Burdette, starting from his Wikipedia page which says that “Robert Jones Burdette (July 30, 1844 – November 19, 1914) was an American humorist and clergyman who became noted through his paragraphs in the Burlington (Iowa) Hawkeye.” The Wiki page also directed me towards my next and major source of information about this man, Robert J. Burdette: His Message, a biography of Mr. Burdette written by his second wife, Clara B. Burdette. According to the foreword of this book which was also penned down by Mrs. Burdette, she says that she endeavored to set forth the life of her late husband by the excerpts from his writings. In the book she says that the later years of her husband’s life were devoted to writing for the press, giving lectures and public addresses. The book quotes Mr. Burdette saying that he would write to his friends “up to the time when the pen became so grievous a burden.” The letter that then went on to get published in many articles seems to be one amongst the correspondences of Mr. Burdette with his friends.

This copy of God and the Struggle for Existence with the annotations inside the front cover was given to the Alderman Library by Mr. M. H. Urner. Resorting to Google to find more about Mr. Urner didn’t prove much of a help; therefore, I started to look for clues about Mr. Urner by pulling out other books that were given to UVA by him. I was lucky enough to find a gift inscription by the author of the book addressed to “Captain Martin H. Urner” in a book titled Applied Mental Efficiency. The Harvard Alumni Bulletin says that Dr. Martin H. Urner was the 1st Lieutenant at Med. R. C. in Princeton N. J. On further digging I happened upon a book called Kelly Field in the Great World War; one of the excerpts from this book says that Captain was one of the flight surgeons taking care of student pilots and that it was safe to say that superior health among student pilots cannot be found at any other field in the country.

The Foreword for God and the Struggle for Existence says that “This book is written to suggest that there are solid grounds in reason for the contrary conviction – God is alive, and from him we may get power ourselves to really live.” The book was published in 1919, i.e. towards the end of World War I. The book says that it addresses many in this world who in the face of evil are unsure about the existence of a divine power but still “faintly trust the larger hope.”

As I try and dig deeper and think more as to why this letter that was originally written by one was copied on a paper by a second and ended up in a book that was written by a third and owned and given to the University by a fourth; having hit a road block trying to find any relation among these four people I just described, there was only one possible thing that came to mind which could justify a link among all these people and the text finding its place behind the front cover of the book: World War I.

War as many have described is the worst form of evil that mankind has seen or can ever see. It drives out the one most important thing that keeps us going in the face of any evil, HOPE. Keeping soldiers motivated while facing such an evil is the most important thing; one of the things usually done to motivate soldiers was to read to them about the divine power and reinstall their faith the existence of divine power even in the face of such a calamity. Captain M. H. Urner who was working in Kelly Field at the time may have stumbled upon this letter that was taken from the newspaper article about Robert J. Burdette’s Faith and found it very inspiring in such trying times and deemed this book he owned a good place to save such an inspiring letter. I am still unable to put my finger on Eva G. Orndorff’s connection all of this. But this conclusion from the research conducted seems like a good explanation to me as to why this letter ended up in this book.

Streeter, B. H. God and Struggle for Existence. Association Press, 1919.