The Book Traces @ UVA team recently happened upon this 1834 edition of Maria del Occidente’s Zóphiël, or, the Bride of Seven in the UVA Library Collection. 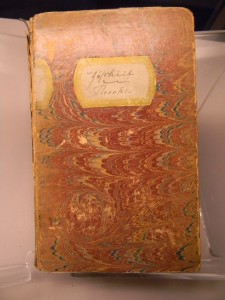 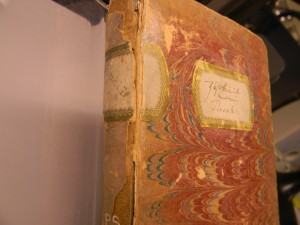 The book’s marbled cover is tattered and nearly detached from its contents. The condition of its interior is not much better: the pages are stained, splotchy, and brittle. That the volume appears so loved and worn, though, only adds to the intrigue of its most curious features: its previous owners’ inscriptions and insertions.

The inner cover contains a bookplate, revealing that the text came to UVA by way of one E. R. Reynolds. 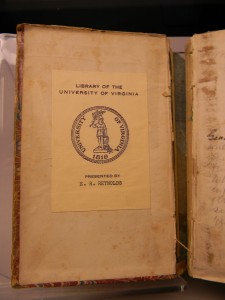 Opposite is the front endpaper, which features two inscriptions. 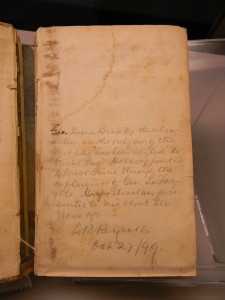 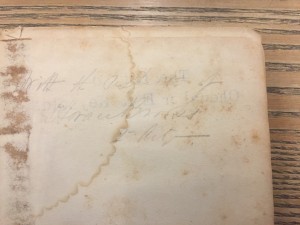 Below is a second inscription: “Gen. Horace Brooks, the above written, was the only son of the poet who has been styled ‘The Female Poe.’ He was appointed to West Point through the influence of Gen. LaFayette. His portrait was presented to me about two years ago. / E. R. Reynolds / Oct 27 / 99.” 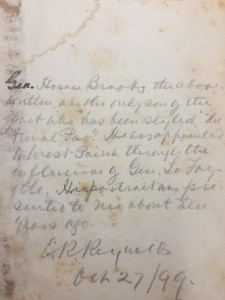 Taped opposite the book’s title page one finds the portrait of Horace Brooks to which E. R. Reynolds just alluded. The backside of the photograph is labeled “Horace Brooks.” A postage stamp and street address, “Chev – E. R. – Reynolds – / 813 Capital St / Washington / DC,” indicate that Reynolds received the portrait at his home by mail. The postal mark reveals that the portrait/postcard originated from New York. 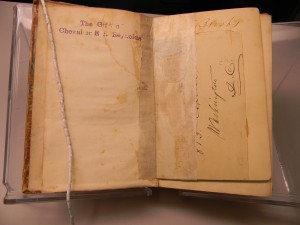 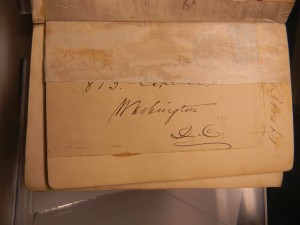 The portrait, which captures the profile of an elderly Brooks, was evidently taken at Quartley’s, a Baltimore photo gallery. Just above the business’s name and address is a New York return address. It reads: “If not called for return / to H. – Brooks – No – 238 –East 34th / New York City – –.” What Reynolds fails to mention in his inscription is that this portrait was “presented” to him by its subject, Horace Brooks. 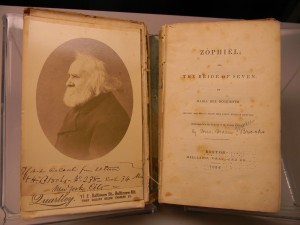 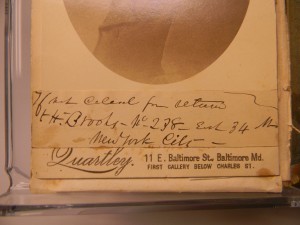 Taken together, these names, dates, and locations hint at some greater narrative. Understanding the particular significance of this volume, though, requires answering a few of the many questions its inscriptions and insertions provoke.

First: Who was this E. R. Reynolds?

Biographies of Chevalier Elmer Robert Reynolds (1846-1907) describe him as a man of diverse interests and life experiences. Reynolds spent his late teenage years fighting for the Union with the Wisconsin Light Infantry. He later studied at Columbian University (now George Washington University) in Washington, D.C. He went on to serve for some twenty years in the United States Civil Service as an examiner of pensions. Reynolds’s biographies, however, remember him chiefly for his work as an ethnologist and botanist. His studies focused primarily on American Indian antiquities in Maryland and Virginia. Titles of his scholarly writings include, for example, “Aboriginal Soapstone Quarries in the District of Columbia,” “Pre-Columbian Shell Mounds at Newburg, MD,” and “Prehistoric Remains in the Valleys of the Potomac and the Shenandoah.” His work won him recognition nationally by the Smithsonian Institution, Peabody Museum of American Archaeology, and Harvard University, as well as abroad. In 1887, King Humbert of Italy knighted him Chevalier and Knight Companion of the Royal Order of Italy.

Biographical accounts of Chevalier Reynolds, which appear in encyclopedias, anthropological society registries, and newspapers, characterize him by his public positions: as a veteran, a public servant, a celebrated scientist. Reynolds’s extracurricular interests, namely his fascination with Edgar Allan Poe, go entirely unmentioned. 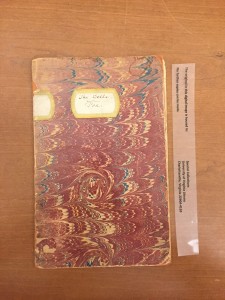 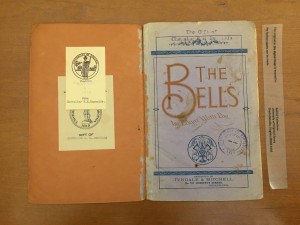 Several books in Reynolds’s collection of Poe, including The Bells and The Conchologist’s First Book, are bound in the same marbled paper and tagged with the same adhesive label as his copy of Zöphiél. 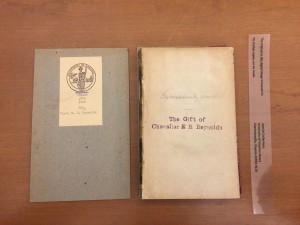 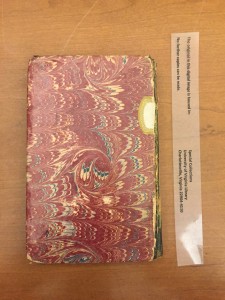 A note on the front endpaper of The Conchologist’s First Book reads: “Excessively rare.” 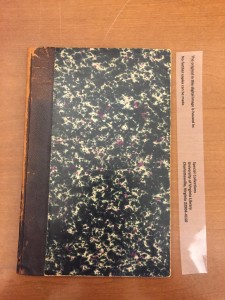 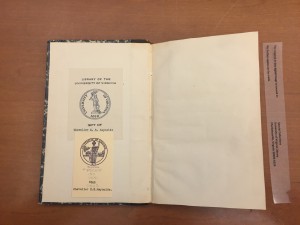 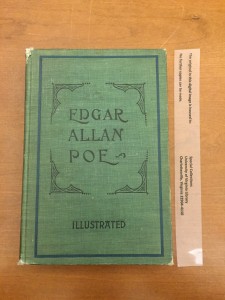 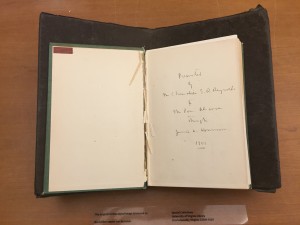 This copy of Joyce’s Edgar Allan Poe features a presentation inscription from Reynolds to the Poe Alcove through James A. Harrison. 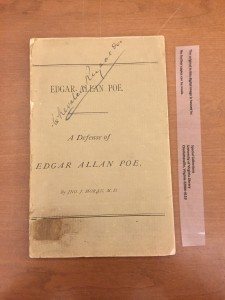 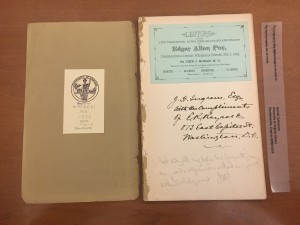 This copy of Moran’s A Defense of Edgar Allan Poe includes a program and ticket for the author’s lecture on the life and character of Poe, as well as two distinct presentation inscriptions. The second inscription is from Reynolds to J. H. Ingram.

The Special Collections Library also contains extensive correspondence between Reynolds and various Poe scholars, including John Henry Ingram, Poe’s most famous biographer, and Charles William Kent, UVA English Professor and president of the Poe Memorial Association, of which Reynolds was a member. 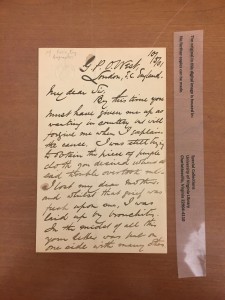 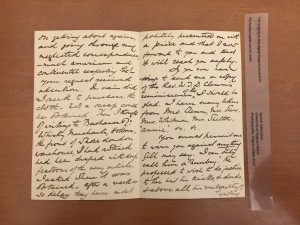 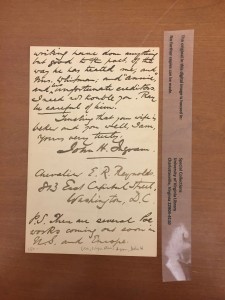 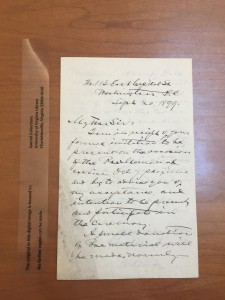 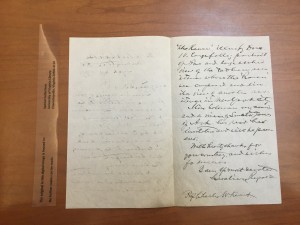 That specific mention of Reynolds’s interest in Poe does not appear in his biographies (of which there are many) suggests that it was more a hobby than a serious, scholarly endeavor. He is credited, however, with contributing material to a 1902 edition of The Complete Works of Edgar Allan Poe, edited by University of Virginia Professor James A. Harrison.

With this background on Reynolds in mind, we move to the next question: Why did Chevalier Reynolds care about Horace Brooks’s copy of Zóphiël?

Reynolds hints at the answer in his inscription on the book’s front endpaper. The book’s original owner, he explains, was Horace Brooks (1814-1894), the son of its author, Maria Brooks, who wrote under the pseudonym Maria del Occidente. This edition of Zöphiél was published in 1834, at which point Horace Brooks was studying at West Point (1831-1835). As Reynolds notes, Horace was appointed to West Point “through the influence of” General Lafayette, who was apparently quite taken with his mother. An account of Maria Brooks and General Lafayette’s first meeting appears in the 1916 Medford Historical Record:

Like a gallant Frenchman, Lafayette was susceptible to feminine charms, and so pleased was he with Mrs. Brooks that he was eager to befriend her, and learning that she desired for her son an appointment to a United States military academy, he procured it for her, a favor which she had been unable to attain (9).

Horace signs the book “2 – Arty –,” suggesting that it came into his possession during his service as a second lieutenant with the 2nd United States Artillery Regiment in the Second Seminole War, between 1836 and 1838.

The most striking moment in Reynolds’s note is, of course, his comment that the book’s author, Maria Brooks, had been “styled ‘The Female Poe.’

Which brings us to our next set of questions: Who was Maria Brooks? And how was she connected to Edgar Allan Poe? 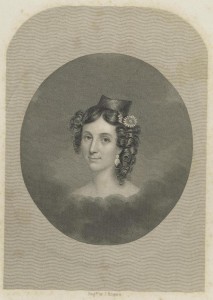 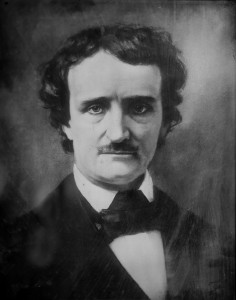 Maria Gowen Brooks (1794-1845) was an American poet best known for Zöphiél, a book of poems based on the story of Sara in the Book of Tobit. Brooks’s biography is marked by episodes of explosive literary productivity, a succession of tragic losses, and extensive periods of travel abroad. At the age of 13, her father died and she became the ward, and shortly thereafter the wife, of her sister’s widower, John Brooks. Indeed, at age 16, Maria wed John, who was 30 years her senior. During their tumultuous marriage, Maria began writing poetry, composing her first poem at age 19. A year later, her only son, Horace, was born. John died in 1823, at which point Maria moved to her brother’s coffee plantation in Cuba. There, she wrote Zöphiél, or, the Bride of Seven. In 1825, she published the first canto of Zöphiél, which caught the attention of English Poet Laureate, Robert Southey. In their correspondence, Southey praised Brooks’s work and gave her the pseudonym “Maria del Occidente.” In 1829, Brooks completed Zöphiél. The work was published in its entirety in London in 1831 and in Boston in 1834. Following the book’s American debut, Brooks captured the interest of another prominent literary figure, this time stateside: Edgar Allan Poe.

Throughout the 1840s, Maria Brooks’s name, and pseudonym, crops up frequently in Poe’s reviews of other female poets. Amelia Welby, he writes, “has nearly all the imagination of Maria del Occidente…” (The Works 203). Elizabeth Oakes Smith’s The Sinless Child is “undoubtedly…one of the most original of American poems—surpassed in this respect, we think, only by Maria del Occidente’s ‘Bride of Seven’” (The Works 129). Frances Sargent Osgood “has occasional passages of true imagination – but scarcely the glowing, vigorous, and sustained ideality of Mrs. Maria Brooks…” (The Works 98). Estelle Anna Lewis’s “The Broken Heart” “is more enthusiastic, more glowing, more passionate, and perhaps more abundant in that peculiar spirit of abandon which has rendered Mrs. Maria Brooks’s ‘Zophiel’ so great a favorite with the critics” (The Works 948).

Literary critic Kirsten Silva Gruesz observes that although Poe “compares nearly every woman poet about whom he wrote to Maria del Occidente,” he never devotes a separate review to her works (77). In a 2008 article, “Maria Gowen Brooks, In and Out of the Poe Circle,” Gruesz quotes Thomas Ollive Mabbott, the only other critic to have previously commented upon “Poe’s apparent interest in Brooks” (95). Mabbott writes: “his references during 1848 and 1849 make me think he was studying her poetry, and had he lived, might have produced a critique upon it” (95). Poe, however, died in 1849.

(Regarding Poe’s death I feel compelled to remark: Legend has it that on his deathbed, Poe called the name “Reynolds” repeatedly. Most Poe scholars doubt the veracity of this myth, but for those who might still be wondering, our Chevalier Reynolds was only three years old at the time.)

Poe’s repeated reference to Brooks in the above-quoted reviews appear to be the most solid connection between the two poets. Indeed, I was unable to find specific mention of Brooks as “The Female Poe,” as Chevalier Reynolds indicates she had been “styled.” Although their relationship is ultimately “unknowable,” Gruesz speculates at length about possible connections between the two writers. She notes, for example, that both Brooks and Poe were included in Samuel Kettell’s 1829 anthology Specimens of American Poetry, which “the young Poe almost certainly got his hands on…as it contained the first critical notice of Tamerlane” (96). Gruesz continues: “Might not the anecdote Kettell told about Brooks—that she took the idea for a poem about a beautiful angel named Zóphiël from her reading in apocryphal literature—have echoed in Poe’s head as he imagined a similar character, Israfel, in a poem first published in 1831?” (96).

Slightly loftier, but intriguing nonetheless, is the eerie overlap in the two figures’ biographies, which Gruesz also highlights:

…a dubiously incestuous marriage involving a teenaged bride; an interest in the esoteric, the ‘curious,’ and the otherworldly; an association with a slaveholding economy; even their experience at West Point, a place that served the literary aspirations of each in different ways (95).

This copy of Zöphiél raises far more questions than I am able to answer. (For example: What was the nature of the relationship and correspondence between Horace Brooks and Chevalier Reynolds? How did this volume come into Reynolds’s possession? What exactly prompted Reynolds to describe Maria Brooks as “The Female Poe”? Was the “Reynolds,” for whom Poe may or may not have called before his death, related to our Chevalier?) It is nonetheless quite clear that Horace Brooks’s book, inscription, and portrait contribute to Chevalier Reynolds’s collection of materials connected, if tangentially, to his favorite author.

Poe, Edgar Allan. Arthur Gordon Pym: Or, Shipwreck, Mutiny, and Famine: Being the Extraordinary Adventures of Arthur Gordon Pym, Mariner, of Nantucket, North America, During a Voyage to the South Seas, and His Various Discoveries In the Eighty-fourth Parallel of Southern Latitude. London: Published by John Cunningham, Crown-court, Fleet-street, 1841.

Poe, Edgar Allan, and Thomas Brown. The Conchologist’s First Book: a System of Testaceous Malacology, Arranged Expressly for the Use of Schools, In Which the Animals, According to Cuvier, Are Given with the Shells, a Great Number of New Species Added, and the Whole Brought Up, As Accurately As Possible, to the Present Condition of the Science. 2d ed. With illus. of 215 shells, presenting a correct type of each given. Philadelphia: Haswell, Barrington, and Haswell, 1840.